Kennedy’s “Report to the American People on Civil Rights”: Fifty Years Ago Today 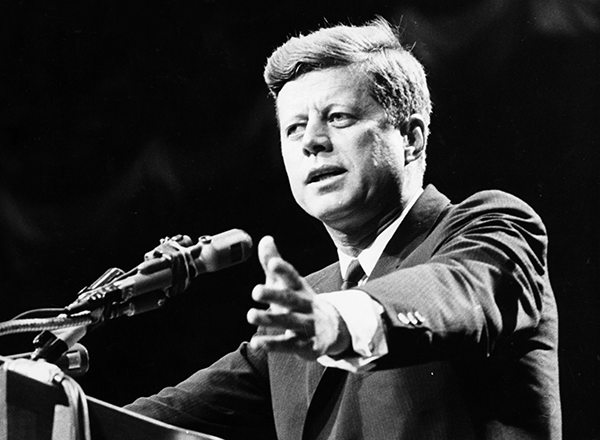 I was born and reared in Birmingham, Alabama during the last 15 years of legal segregation. My adolescence corresponded with the era of Bull Connor, his firehoses and police dogs, the bombing of a church that killed four little black girls, and Martin Luther King’s, Fred Shuttlesworth’s and others’ titanic efforts to secure equality for African-Americans.

As a child I accepted the status of African-Americans as a fact of life, in the same manner I accepted my family life and education as just the way the world was. Blacks were permanent second-class citizens, under-educated, poor and without the rights of white people. That was just the way the world was. Colored-only water fountains and restricted public opportunities were a natural result of that status. Like all kids, I didn’t give a thought to whether things might be different.

That is, until 1961 when our library teacher taught us about Booker T Washington, George Washington Carver, Marilyn Horne and other great African-Americans. It awakened in me the first notions that blacks could be intelligent, could be something other than subhuman, could make a positive contribution to society. My ideas started to ferment, then to make slow changes in response to what I had learned and to the egregious actions of Bull Connor, George Wallace and others going on at that time in Birmingham.

Fifty years ago today on June 11, 1963, President Kennedy gave his Report to the American People on Civil Rights and I clearly recall how affected I was by it – the speech was a watershed moment for me. Rather than approach the subject as a legal problem and to Southerners a question of an overreaching federal government, Kennedy made a convincing moral argument in favor of full equality for African-Americans.

Following are excerpts from that speech, with some commentary at the end.

This Nation was founded by men of many nations and backgrounds. It was founded on the principle that all men are created equal, and that the rights of every man are diminished when the rights of one man are threatened.

We are confronted primarily with a moral issue. It is as old as the scriptures and is as clear as the American Constitution.

The heart of the question is whether all Americans are to be afforded equal rights and equal opportunities, whether we are going to treat our fellow Americans as we want to be treated. If an American, because his skin is dark, cannot eat lunch in a restaurant open to the public, if he cannot send his children to the best public school available, if he cannot vote for the public officials who will represent him, if, in short, he cannot enjoy the full and free life which all of us want, then who among us would be content to have the color of his skin changed and stand in his place? Who among us would then be content with the counsels of patience and delay?

We preach freedom around the world, and we mean it, and we cherish our freedom here at home, but are we to say to the world, and much more importantly, to each other that this is the land of the free except for the Negroes; that we have no second-class citizens except Negroes; that we have no class or caste system, no ghettoes, no master race except with respect to Negroes?

We face, therefore, a moral crisis as a country and as a people. It cannot be met by repressive police action. It cannot be left to increased demonstrations in the streets. It cannot be quieted by token moves or talk. It is time to act in the Congress, in your State and local legislative body and, above all, in all of our daily lives.

It is not enough to pin the blame on others, to say this is a problem of one section of the country or another, or deplore the fact that we face. A great change is at hand, and our task, our obligation, is to make that revolution, that change, peaceful and constructive for all.

My fellow Americans, this is a problem which faces us all–in every city of the North as well as the South. Today there are Negroes unemployed, two or three times as many compared to whites, inadequate in education, moving into the large cities, unable to find work, young people particularly out of work without hope, denied equal rights, denied the opportunity to eat at a restaurant or lunch counter or go to a movie theater, denied the right to a decent education, denied almost today the right to attend a State university even though qualified. It seems to me that these are matters which concern us all, not merely Presidents or Congressmen or Governors, but every citizen of the United States.

This is one country. It has become one country because all of us and all the people who came here had an equal chance to develop their talents.

We cannot say to 10 percent of the population that you can’t have that right; that your children cannot have the chance to develop whatever talents they have; that the only way that they are going to get their rights is to go into the streets and demonstrate. I think we owe them and we owe ourselves a better country than that.

Although this is not the place to discuss the matter in detail, we all know that, despite vast gains, African-Americans still experience disparate housing, income and voting rights, among other things. (More info at Black Demographics.)

As mentioned, Kennedy’s speech was a watershed event in my life. If you were alive and aware fifty years ago, did you hear the speech? If so, what did you think of it then? What do you think of it today?